Die Bergretter at Ramsau am Dachstein 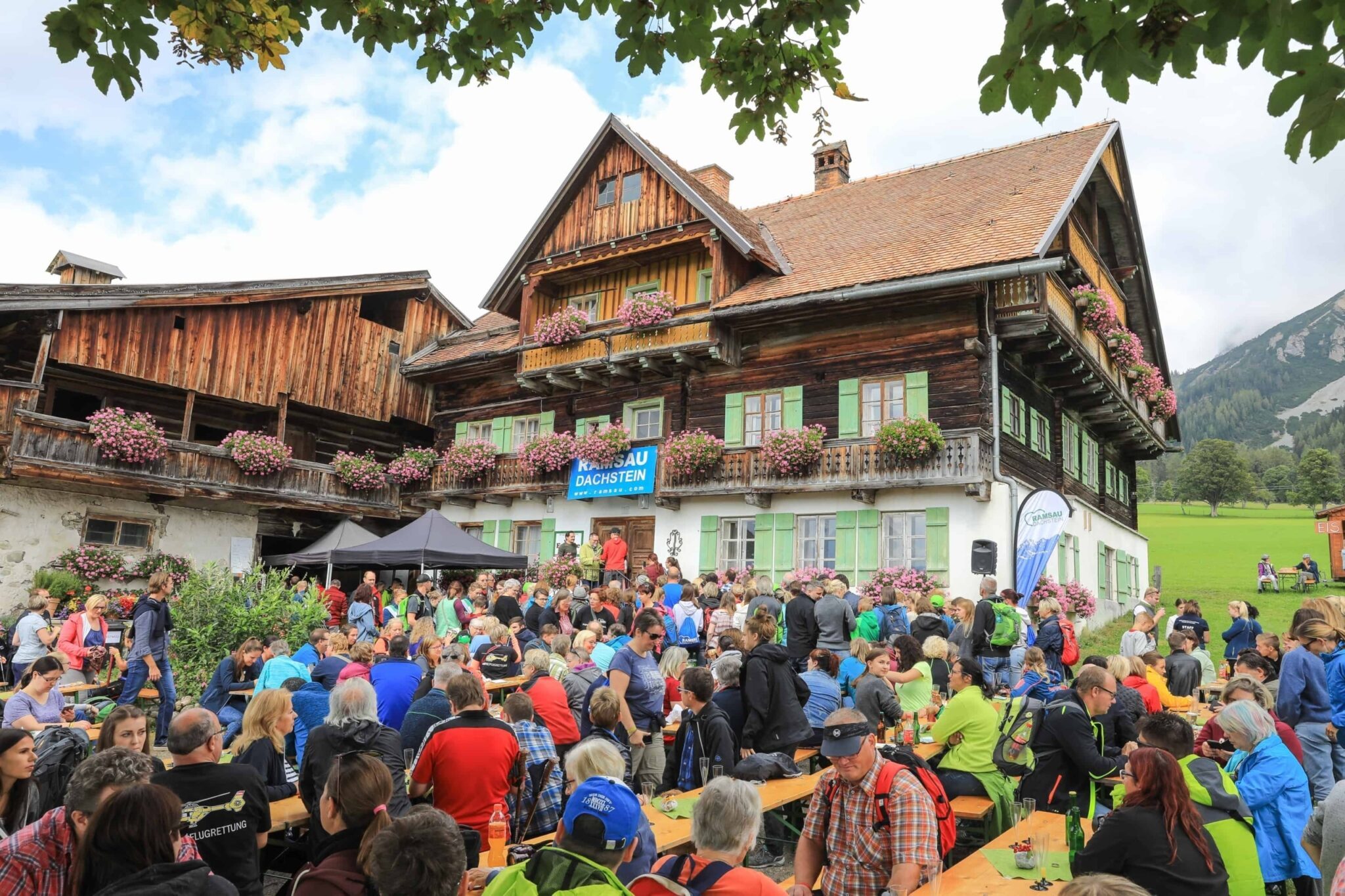 TV series based in Ramsau am Dachstein.

Many of the main locations, such as “Pension Marthaler”, “Emilies Hof” or the “Bergretter Zentrale”, are located directly in Ramsau am Dachstein, not far from the Hotel Matschner. Besides these main locations there are further ones throughout the entire region Schladming-Dachstein. The helicopter base is in Niederöblarn, all scenes in the hotel of series Mayor Herbrecht are being filmed in Schlosshotel Pichlarn. Stoderzinken with the Stoderkircherl or the Bachlalm and the Silberkarklamm are popular film sets.

The first season already won over millions of viewers on ZDF and ORF in 2009 and got a great start. In the following years until today, the modern series developed into a crowd favorite. Emilies Hof, the Bergretter Zentrale and many more are located in the village at the foot of the Dachstein – that has been skillfully staged by the directors and the entire production team of the German film association ‘ndF’.

Actors and their characters

As head of the Ramsau mountain rescue service, Markus Kofler is following in the great footsteps of his predecessor Andreas Marthaler. His colleagues’ grief over the loss of Andreas does not make it easy for him to get started. But Markus Kofler bites through. He begins to take on the leadership role in the team. Never give up is his motto and he always pushes his personal limits.

Michael is the mountain rescuer’s helicopter pilot. He knows exactly what is possible and what is not and so it is often up to him to slow his colleagues down because the safety of the team comes first. In season 7 Michael Dörfler realizes that there has been a woman around him for a long time, whom he would love to get to know better.

Simon is “the newcomer” to the mountain rescuers, but he offends his colleagues right from the start. Especially Markus finds it difficult to make friends with Simon Plattner´s less team-oriented nature. But for mountain rescuers, solidarity counts more than anywhere else and so everyone has to get used to the new situation. On the other hand, Simon immediately feels drawn to police officer Jessi. She seems to reciprocate his feelings – only he stands in his way.

As a rescue doctor, she is an important part of the team and most involved in the mountain rescue operation. She is the half-sister of Tobias Herbrechter and fell in love with the head of the mountain rescue, Andreas Marthaler. Ironically, the man who was involved in Andrea’s accident becomes part of the team. But Katharina Strasser pulls herself together and is a mountain rescuer with great dedication. She maintains an overview, takes care of the injured medically and psychologically and bites through when necessary.

The son of the hotelier and mayor Herbrecht is a mountain rescuer with body and soul, but initially he has considerable problems with his new colleague. Tobias Herbrechter has lost his friend Andreas, but his love for Emilie keeps him going. They share the pain and find even closer to each other. It’s getting married! Tobias often bears wounds on rescue missions, but he accepts that because saving lives is his great passion.

Emilie lives with her children on the farm that she once bought with her late husband. She receives support from Andreas’ father Franz Marthaler and Tobias Herbrechter, in whom she has finally found love again. The mourning of the loss of their friend Andreas brings Emilie and Tobias even closer together, but also shows Emilie Hofer that she is justified in fear when the mountain rescuers start on their missions. Tobias wounds have always healed quickly, but what if something worse happens? She doesn’t really want to think about it and so Emilie throws herself joyfully into the preparations for the big party.

Peter Herbrechter is a businessman and mayor of Ramsau. He owns the best hotel and knows how to use his contacts skillfully at all times. He has a long friendship with Franz Marthaler. Peter would like to see his son Tobias, as his follower in his company, but he also sees his illegitimate daughter Katharina in a managerial position. He worries that both of them care more about rescuing climbers who have had an accident than about himself and his business. However, it also makes him proud.

Franz’s son, Andreas, was killed in a mountain rescue operation. Franz Marthaler suffers a lot. It helps him to live in his familiar surrounding on Emilie’s farm and to help her with her everyday work. As a young man he was also part of the mountain rescue team and knows about the dangers. It is a horror for him that Markus Kofler, the man who was there in his son’s accident, is going to be the new head of mountain rescue and will inevitably often run into him. Soon he has to find out that Markus is exactly the right person.

Andreas Marthaler’s dream is to open a climbing school in the Grand Canyon. But everything changes when his best friend Stefan’s fatal accident occurs. Andreas takes care of Stefan’s widow Emilie and her children, as well as the indebted farm. As the head of the Ramsau mountain rescue service, Andreas Marthaler repeatedly succeeds in saving the lives of injured mountaineers during dangerous rescue operations. In the sixth season he is planning a trip around the world and therefore wants to leave mountain rescue team. During his last mission, he is hanging on a rope with a little girl, they are in danger of falling together. To save her, he cuts his safety rope and falls into the depths. The girl is pulled up by Markus Kofler and rescued. Andreas sacrificed his life for her.

Weekly in summer – every Friday

The leisurely hike leads to the original locations of the ZDF series “Die Bergretter”. The guided hike starts at 10 a.m. in Ramsau Ort at the mountain rescue center. Visit of the headquarters, afterwards it goes in approx. 40 minutes to the Pernerhof – “Emilies Hof”. The guided hike with Sepp Reich takes place in all weathers, from the beginning of June to mid-September.

Meet your TV series stars from “Die Bergretter” and be there from September 9th to 11th, 2022. Interesting insights and exciting details about the current season. Hike with us to the filming locations in Ramsau am Dachstein and look forward to a great fan programm.

On the mountain rescue fan day there is the opportunity to be part of a spectacular rescue show by the Ramsau am Dachstein mountain rescue service in the cross-country stadium. There will of course also be an appearance by the actors.